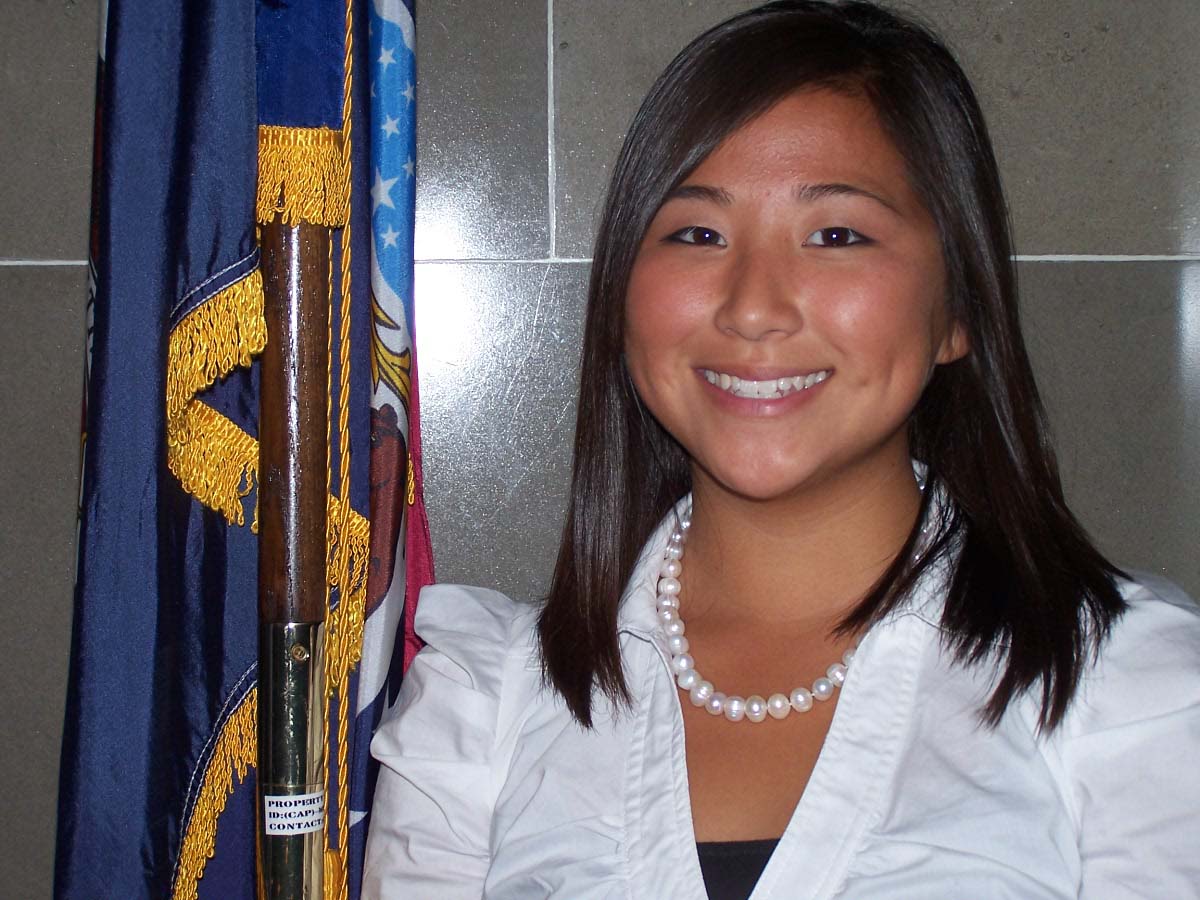 Rebecca May is a broadcast journalism major class of 2012 at the University of Missouri.  She grew up in St. Louis, but I was adopted from South Korea when she was five months old.  She has one older brother, who was adopted from Honduras.

She interned at FOX 2 in St. Louis, last summer.  Some of her responsibilites were booking guests for the morning show and putting together packages for the 4 p.m. show.

She worked a semester at KOMU TV-8 the NBC affiliate in Columbia, MO, as a production assistant.

She also took on an internship her freshman year for UNIGO.com.  It was a website for prospective college students trying to get a deeper look into different universities.  She was the Mizzou correspondant and wrote blogs and put up videos.

She is involved in the Asian American Association and Alpha Phi Fraternity.  She is the dance director and risk management chair of her house.

This is Rebecca's first semester working at Missouri Digital News in Jefferson City.

Rebecca intends on being in a reporter in St. Louis, where she grew up.

Journalism is a fast paced profession.  There is always something going on, even as minute as plaster falling from the House Chamber ceiling.  Regardless, there is always news being made.

A pertinent task for a journalist, as I learned this morning, is to really stay on top of what is going on.

After attending the Wreaths Across America ceremony where the Governor spoke at, I failed to call his attention to speak about the canceled trip to Asia.

What I learned from today is that although work may stop when electricity is lost in office buildings it doesn't stop in the journalism department.

When House and Senate members came out of their dark offices, the journalists go running into the hallways to talk to them and see what their responses are.

As I was trying to plug in my microphone to the marantz in the pitch black, I realized this profession is unlike many for good reasons.

The Uptown Theater in Kansas City was expecting many guests including the current State Auditor Susan Montee.

Montee was expected to be at the Theater for the majority of the night, once the polls closed.

The co-owner of the Uptown Theater said he was expecting her arrival at the same time as Carnahan's, but she never came.

Montee's whereabouts were unknown to many, even fellow Democratic workers.

The Communications Director for Congressman Emanuel Cleaver said he thinks when there is a close race like in Montee's case it is difficult to be put in the public arena.

Today I learned that interviews are sometimes very difficult to schedule, so when the opportunity comes around don't sit on your laurel and wait.

When trying to put together a story about a new animal care center in St. Louis, the contacts were limited to the College of Veterinary Medicine.  I attempted to call others from the University, but many were unaware of this new plan.  Next I called the City of Wentzville's City Planner to see if he could give me more information.  Doug Forbeck was also unaware of the plans being finalized, so he would call me back.  After many failed attempts, Forbeck called back on my cell phone.  To my dismay I did not have enough time for him to give me a recorded interview.

There was the knock of opportunity and I missed it.  I realize that whenever I make a call I should be ready with the recording equipment set up.  Not everyone has time to wait around for reporters to call them back, even if it takes only five minutes.

Here is what I learned from today, news is new, so the winner in the game of journalism and media is who can get the accurate news first.

This lesson was given to me from Steven Walsh, former journalist, as he recapped about someone telling him a piece of information regarding a candidate at a speech.

Not to get into specifics, but journalism is all a game on who can get to the sources and find out what is going on first.  There may not be any trophy given to you for each piece of news that you publish first, but it does build up one's credibility.

Writing for different styles of journalism is something that I have been trying to wrangle in.  From writing stories at MDN, I feel that I have started to grasp the concept of what is radio style and what is not.  Of course, being a good journalist means being versatile.

Today I learned that being versatile means the rules in one sequence can be completely different from another sequence.  I wrote my campaign feature on Jonathan Dine for print.  I learned how to break up my quotes and what things are more appealing in a print story.

There are more details that can be added because the reader can always go back and look, where in a radio story it needs to be a more general concept so the listener can understand.

Today I was writing a story about the Constitutional Amendment 2.  Basically this would exempt former Prisoners of War from paying property taxes on his or her homes.  This sounds like an easy story to find sources however, it was not.  Mary Schantag was my first source and she is the founder of the P.O.W Network.  Schantag gave me a good interview, but I realized all of her opinions had a clear side of the issue.  I needed to find someone to balance out this story, but I called six different organizations and numerous people to find myself stuck with a very biased story.

If I was not leaving voice mails I was listening to elevator music on hold for ten minutes.  There was no response at all.

One thing that I have learned from the day is that when the obvious is not available, you need to look from outside the box or in this case the post dispatch and every other source in a local newspaper that covered the story.

After every source in the stories backfired I called the U.S. Department of Veteran Affairs and the U.S. Veteran Affairs Commission.  Then I did a search for prisoners of war that are currently living in Missouri.  Unfortunately a lot of them died so after a brief moment of silence, I continued the search for a sources.

Today I learned that when the person you plan on interviewing is not around it is time to make new friends.  My spot story today involved the expansion of a mosque in Jefferson City.  The president of the Jefferson City Muslim Community was not responding.  I took a chance to drive out to the location of the mosque and to my dismay there was nobody there.  I realized that this location was an odd place for a mosque.  The neighborhood of Moreau is nothing but a gravel road and a few houses.  So like any journalist must do, I went and talked to people that I did not know.

I went from house to house realizing that many people are gone at work.  When I almost gave up I drove along the street to a local roofing store.  I went into the store and talked to the owner who also lived in the neighborhood.  Joyce Herzing of Herzing roofing may not have been the most informed about the mosque, but she led me to two people who would.

Harry Kennedy had lived in Moreau for 30 years and had been around when the mosque was built and has seen the type of community involvement.  Kennedy also led me to my next subject who lived in a little blue house right next to the mosque.

Barry Faulkner had personal encounters with the owners of the mosque and gave me nothing but great comments towards the Muslim community.

I returned realizing that I could have possibly given up when I entered an empty mosque parking lot, but I let my true journalistic instincts lead me to a very interesting story.

Today I attempted to start my personality profile on Jonathan Dine from the Libertarian party.  Who knew that trying to get a hold of a candidate would be so complicated?

There were many brief descriptions about Dine.  However, the most interesting information didn't come from the Columbia Missourian or the Kansas City Star, but from his facebook page.

Dine is a personal trainer and has one daughter.  He seems to be an avid facebook user.  Some of his favorite quotes came from past presidents such as Adams, Washington and Jefferson.

This quote among many take the theme of society needing new leaders.  Dine hopes to be one of these, but with the strong support from his other opponents this maybe a difficult task.

What occurred to me is that government, even at a local level, is bi-partisan.  Searches that I had done about Robin Carnahan had detailed information and the same went for Roy Blunt.  Who are both members of the main parties.  However, trying to find even a number for Dine was an endless phone conversation from one Libertarian to another.  The only way to get a hold of Dine was through email.

Today went a lot more smoothly than my first experience at Jefferson City.  My story assignment today was to research about teacher pensions.  The main source of my stories was Otto Fajen of the Missouri National Education Assocciation.  Fajen was very useful in informing me about the liguistics of pensions in the first place.  He discussed some of the issues that the Missouri Public School system is facing besides pension increases.  There seemed to be a lot of legislative action going on at the MNEA.  We discussed on how Susan Montee's audit plays into budgets affecting the school system.  I think today was my first time trying to write about politics rather than reading and analyzing.  Erica and I were the first to arrive and we were the last to leave.  I think being able to figure things out on your own is part of working here, and I managed to produce my stories from reading the packet.  I hope that I continue to learn and grow as a writer.

First Day
Posted 09/01/2010:  Today was my first day at Missouri Digital News.  There were a lot of technical barriers that I encountered.  When assigned our topic, Erica Coghill and I assigned different sources to each other to interview.  The story was about fungus growing on lawns due to the humidity so the first obstacle was to figure out who to call.  I called a lawn service.  He did not want to be recorded, so I called a Jefferson City lawn service.  Eric Dulle of Dulle Lawn and Pest Treatment gave me my interview.  Then I came across another problem.  The mirantz was not working and all of my interview had no sound.  The second time I called the mirantz was still acting up and I switched machines.  The final attempt the audio worked properly.  Before I knew it, we were on a time crunch.  Waiting for sources to call back was an issue and a lack of time management.  I think next week will go a lot smoother.