NewsBook:  Missouri Government News for the Week of December 22, 2014

Missouri Digital News and NewsBook is on holiday break. We'll be back January 5 for the start of the Missouri legislative session.

In the meantime, enjoy our digital archives of rollcall votes, bills, lobbyists information and much more that go back more years than any other existing online site involving Missouri public police.

Below are the items from our last NewsBook.

Missouri budget leaders and the governor have agreed that state tax collections will be $367 million below the original estimate upon which Gov. Jay Nixon had based his budget proposals back in January.

Even before the start of the legislative session, legislative budget leaders had argued the governor's projections of tax collections were too high.

But the revised estimate is even lower than what the legislature had projected.

The revised estimate is part of what is termed a "consensus revenue estimate" that is used for preparing the budget plan the governor will present to lawmakers in the 2015 legislative session.

For the budget year that will begin July 1, 2015, the governor and the incoming budget chairs for the House and Senate estimate there will be a 3.6 percent revenue growth.

Vandeven currently serves as the deputy commissioner for the Division of Learning Services in the Education Department.

The Department of Elementary and Secondary Education announced the new commissioner Wednesday, Dec. 17, after the State Board of Education interviewed five finalists the previous week.

In a telephone conference call Wednesday, Vandeven said she would focus on improving districts throughout the state in addition to working with unaccredited districts in St. Louis and Kansas City.

However, she said there must be a "tuition fix" in order to fund intervention plans for unaccredited districts.

"While all children deserve access to a high quality education, there are ways to make that happen without bankrupting the whole school district," Vandeven said.

Vandeven will also focus on the Top 10 by 20 initiative, which aims for Missouri to be ranked among the top 10 states for student achievement by 2020.

State Board President Peter Herschend said Vandeven was chosen for her passion and her commitment to Top 10 by 20.

"She is probably the best expert in the state on the administration of those goals, formulation of them and then seeing to it that they're gonna happen," he said.

The search for a new education commissioner began in September after Nicastro announced her resignation. Nicastro had been criticized for her handling of unaccredited schools in St. Louis and Kansas City.

In the last two elections, 74 Missouri House seats and 9 Senate seats went uncontested by either Republicans or Democrats.

Those numbers continue a disturbing trend of noncompetitive state legislative elections over the years dating back to 1996.

One factor that could explain the number of uncompetitive elections is the 1994 voter-approved term limits initiative.

"I think [term limits] make a difference in part because you don't get as many people deciding they're going to make a career at the state legislative level," MU political science professor Marvin Overby said.

Overby also says the high number of noncompetitive elections doesn't surprise him because Americans have other options besides elected office.

"They also have other venues in which they can exercise that ambition, particularly the marketplace," Overby said.

Another factor that could explain noncompetitive legislative elections is the way redistricting is done in Missouri.

Unlike most states, Missouri uses a specially appointed commission to draw the state's legislative lines while the General Assembly draws the congressional lines.

Incoming Speaker of the House John Diehl, a major figure in the 2011 congressional redistricting effort, says his experience tells him there is no good solution.

"One thing going through the process you find is that there isn't any perfect system because there's people involved," Diehl said.

The next round of redistricting will occur in 2021.

Lawmakers look to help St. Louis region rebound in the 2015 legislative session after months of turmoil 12/16/2014

It was just 3 weeks ago that a grand jury decided not to indict Ferguson police officer Darren Wilson in the shooting death of unarmed black teenager Michael Brown.

After a few nights of unrest, the conversation has shifted on how to help the region rebound through education, economic development, and reforms to how police do their jobs.

She says this would greatly enhance the criminal justice process.

"I just believe that [body cameras] will dispel some of the rumors as well as have more accuracy if you have that type of equipment," Pace said.

"When you have a video record of what the facts actually were, it certainly makes that a lot easier and a lot more efficient," Schaefer said.

Another area multiple lawmakers identified is changes to the state's education system.

"There's a tremendous need for electricians, for plumbers, for carpenters, for brick layers, all of those vocations," Lant said.

"I think vocational training is valuable," Diehl said. "Hands on work, I think, is very important and is a way out of poverty for a lot of people."

Lawmakers will begin to take up these and many other Ferguson-related issues when the 2015 legislative session begins on Wednesday, January 7. 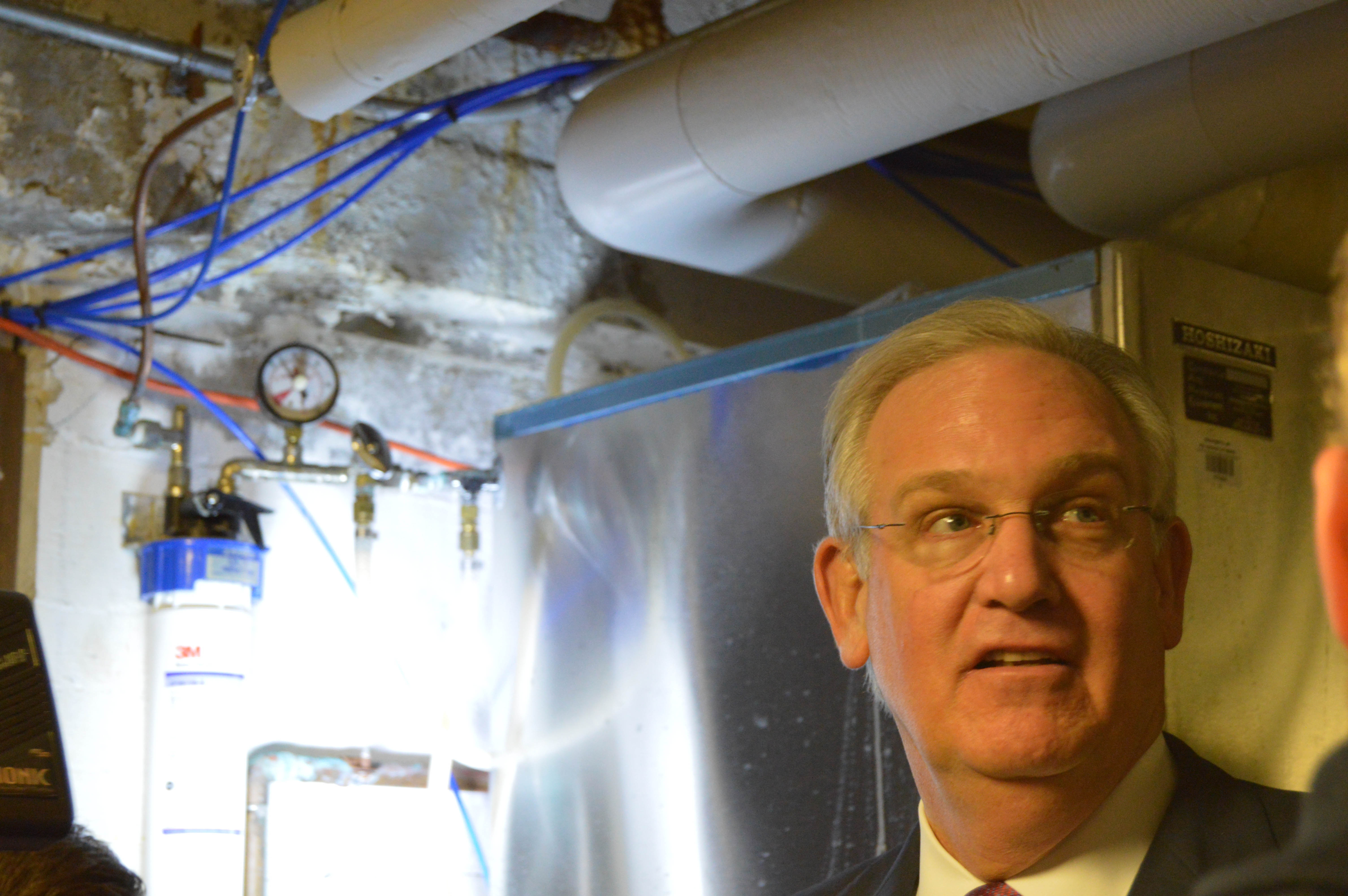 It isn't every day the sitting governor of Missouri pulls a stalactite off the wall in the Capitol basement, but Gov. Jay Nixon did just that during a tour of the aging building Monday.

He and legislative leaders toured the basement, including areas under the parking garage.

Nixon said he was surprised by what he saw.

"It shows us why we've got to get to work on this," Nixon said. "It's going to get worse."

During one portion of the tour, Nixon viewed a wall filled with stalactites, pulled one off, and gave it to a reporter.

"It's a token of my esteem for your hard work," Nixon said.

Nixon later held a press conference with legislative leaders and pressed the need for the money for repairs.

"Each day we wait to address these issues, we add to the ultimate cost of fixing them," Nixon said.

Senate Majority Leader Ron Richard said this has been a priority of his going back to his years as Speaker of the House.

"Something better happen or we'll all be walking on mud," Richard said. "[The basement] is just not a good place to work and do business."

Nixon said the estimated cost of Capitol repairs is between $40-75 million, but that could change.

"As we get down and look at the various projects and the scope of the projects, we'll get a hard pencil to that in the coming weeks," Nixon said.

The number of athletes who sustained a concussion continues to be on the rise in Missouri. 12/15/2014

The Missouri State High School Athletic Association, an association of high school athletic departments, says the trend is not unexpected.

More than 600 high school athletes nationwide suffered a concussion during the 2011 to the 2012 school year.

MSHSAA has studied the number of brain injuries high school athletes receive and has policies on concussion management and provides classes for coaches about concussions.

"We do have a return to play policy for athletes," says Jason West, Communications Director for MSHSAA. "Or even students in some of the other activities that are recommended that the schools follow."

West says the increase in concussions is due to the publics' greater knowledge of the symptoms and effects of concussions.

Missouri law requires all high school athletes to read and sign a form about concussions prior to the athletic season, and anyone who has sustained a jolt to the head must wait 24 hours before returning to play.

Chris Kelly, a House Democrat from Columbia, was against the law because he does not believe public schools should be regulated by the government.

"Virtually every time the legislature seeks to impose more regulations onto the schools they do so for political, not educational reasons," says Kelly.

Athletes who play football are the most susceptible to concussions, according to the Centers for Disease Control.