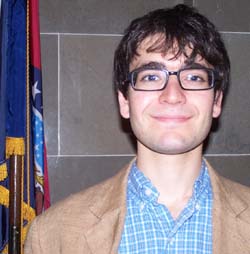 Joe Yerardi comes to the University of Missouri's journalism school by way of NYU, where he earned a bachelor's degree in journalism. He has worked at ABC News, Metro New York and the Philadelphia Daily News, among others. He has an interest in public policy reporting, computer-assisted reporting and the Red Sox.

Stories by Joe Yerardi in 2010 include:
Joe Yerardi's Blog in 2010
Obviously, someone thinks what we do is important

Another member of the legislature whom I had interviewed had misinterpreted a question of mine and had called the chairman, seeking more information. The chairman, taken aback, had in turn called me to "clear it up." Of course, I had not told the legislator anything of the sort. It was a simple misunderstanding but it was a reminder of just how much influence reporters can have--or, at the very least, how much influence those who are most covered by reporters, like politicians, believe they have.

So, cynics out there, don't tell me that our reporting has no impact. Clearly, in the eyes of those who are most covered in it, it does.

Yes, I flew home for Thanksgiving week so don't look for my byline until next week, where I'll be looking at the impact of Republicans' expanded legislative majorities on the redistricting legislators are expected to take up in the next session.

For clues on where Republicans are headed, look at their leaders
Posted 11/15/2010:  With the 2010 legislative elections in the book, speculation is already underway about what the priorities of the newly-strengthened Republican majorities in the House and Senate will be.

Some insight might be gained by looking at their leadership.

In the House, the Republicans will nominate Steven Tilley to be Speaker. Tilley, a well-known conservative, has indicated he'll stay away from divisive social issues but has indicated that he'll push conservative issues like eliminating the state's income tax.

In the Senate, Rob Mayer beat out Kevin Engler for the top spot of president pro tem. Mayer, seen as the more conservative of the two, apparently won by a tie-breaking drawing. Mayer is already making waves by indicating he'd like to see a "right to work" bill introduced in his chamber.

With conservatives in charge of both chambers and both chambers enjoying enlarged Republican majorities, the next two years could see a great deal of partisan conflict in the run up to the gubernatorial election two years from now.

Well, it's all come down to this. Tomorrow, we'll have a new (presumptive) United States senator. Who's it going to be? Well, the smart money's on Blunt. All the polls have shown the Republican as up in a Republican year.

But if you're not interested in staying up that late tomorrow night, here are three things to look for in the early returns that should tell you how the night will turn out.

1) In 2008, Barack Obama won St. Louis County 60 to 40 percent. It's one of the most heavily Democratic counties in the state. If Blunt is holding Carnahan to under 55 percent of the vote, the Republican is going to have a big night.

2) In 2006, Democrat Claire McCaskill won Boone County, 53 to 44 percent against Jim Talent. Boone County tends to vote for the Democrat in statewide races. If the victor there is too-close-to-call after, say, the first hour of polls closing, Carnahan should be worried.

3) Jackson County, comprising the eastern suburbs of Kansas City, is the consumate swing county in Missouri. Whoever's winning that county is winning the election.

All right, that's all for this week, folks. Until next time, take it easy and remember: vote.

Correlation means two things are associated in some way.

Causation is a specific form of correlation whereby one thing is directly causing the other.

The relationship between campaign contributions and the actions of politicians receiving them illustrates the difference.

The politicians insist contributors fund their campaigns because they agree on the issues.

Good government advocates say the politicians and their contributors agree on the issues because the contributors fund their campaigns.

Correlation vs. causation. I've got a story coming out this week about Rex Sinquefield's mammoth campaign contributions to candidates across the state.

All the politicians I interviewed for the piece insist, "No. No. No. The money doesn't influence me one bit."

Are they telling the truth? Read the article and decide for yourself.

The press has weighed in...will the people listen?
Posted 10/09/2010:  The press has weighed in on Proposition A and their verdict is a definitive "No." On Sunday, the Springfield News-Leader became the latest major newspaper to come out against the measure that would sharply curtail the ability of municipalities to collect an earnings tax.

In its editorial, the paper portrayed the vote as denying local control to Springfieldians and urged a "no" vote. In so doing, Missouri's third-largest newspaper joined the Kansas City Star and St. Louis Post-Dispatch in presenting a united front against the ballot measure.

Will voters heed the papers' calls? We'll find out in a little under four weeks.
Trusting Your Editor
Posted 10/03/2010:  So, this week, I finally got to put my computer-assisted reporting skills to the test. I came to Mizzou largely to learn those skills--things like SQL, Microsoft Access and My FoxPro. Next semester, I intend to take some computer mapping courses.

The story I'm working on (a two-parter, actually) is about the money in the senate race: who's spending what and on whom? To that end, I'm using a lot of 2010 FEC data.

One of the most difficult and stress-inducing aspects of the work is fact-checking my results. It's not as if this exact story has been done elsewhere. I'm running some very specific, unique queries on this FEC data to answer some questions I have and give my readers something to think about, heading into the election. So, I'm going out on a ledge. I know that I might miss something (or somethings) and make an incorrect statement (or statements). And I know that I might get called out on it by one of the campaigns or one of their contributors. But I'm not letting that get in the way of my reporting. The fact that others share this concern was driven home when I was speaking with a fellow reporter (though on a separate beat) last night.

This reporter mentioned that she's sometimes afraid to get specific in her stories (especially with numbers and other facts) because she's worried that she might make a mistake and be embarrassed when it's discovered. So, she avoids specifics. This is why trusting your editor is so important.

As reporters, we rely on our editors to check our facts and question our copy but we also rely on them to have our backs when we do screw up. We need to know that, if a mistake does slip through and we're called out on it, our editors are going to back us up. Without that confidence, you get people like that reporter last night, who are afraid to do their jobs. That's not good for the watchdog role of the press. And that's not good for the public.

Whither the other four debates?
Posted 09/25/2010:  The contest to replace retiring Missouri Senator Kit Bond took an odd turn Thursday, when Representative Roy Blunt, the Republican candidate, announced he would participate in just two debates with his Democratic opponent, Secretary of State Robin Carnahan, and that neither would appear on network television.

The Blunt campaign's objection, as explained by spokesman Rich Chrismer, was that they were worried about upsetting the television networks that were not chosen to air the debates.

That had political watchers dumbfounded since he'd made such a big deal about challenging Carnahan to a half dozen debates as recently as mid-August.

Regardless, with the debates now scheduled, the campaign season will likely kick into high gear.

It's just too bad that more of Missouri's voters might not have the opportunity to watch these two candidates talk about the issues.

I'm a reporter
Posted 09/18/2010:  I'd never covered a court case before yesterday. That's when I was in the Division I courtroom of the 19th circuit court on East High Street in Jefferson City. I was there to cover a hearing that would determine whether Proposition A, the anti-earnings tax initiative, would remain on the November ballot.

I assiduously took notes throughout the hearing, jotting down the arguments on both sides and thinking how I'd explain the issues to my readers.

The judge made clear he wanted all interviews to be conducted outside of the courthouse, so when the hearing ended after about an hour, I found myself flanked by reporters, interviewing the lawyers underneath a bright Missouri sun.

It was a scene I'd seen countless times before on the evening news: reporters interviewing attorneys outside of a courthouse.

And that's when it hit me: this is the Missouri method. I'm a reporter, just like the women and men next to me. Sure, I'm a student, too, but this isn't class. This is real. And I'm here, covering it.

And what a story it was!
Posted 09/11/2010:  I had my first story published this week. It was quite an experience. It started with my bolting south on Route 63. After about 30 minutes, I pulled into the parking lot of the Capitol Plaza Hotel at 9:05, five minutes after the scheduled start of Governor Nixon's press conference.
I reached into my messenger bag in the passenger seat and pulled out...nothing. I still have no idea where my notepad went and that's why the last five pages of my car's owner's manual is filled with quotes from the governor of Missouri.
After somehow managing to avoid passing out during the presser (no coffee that morning), I returned to the office in the Capitol building a few blocks away.
The story ended up expanding into a bigger piece due to the fantastic timing of state auditor Susan Montee's releasing, that very morning, a report blasting the management of two tax credit programs in the state.

They say that first story's the hardest and that it gets easier after that.

Now, if only I could get this press guy from the Blunt campaign to return my calls...

The agony of rejection
Posted 09/07/2010:  I had my first rejection today (no, not that kind of rejection; those have been going on since my first middle school dance). For the past two weeks, I've been following developments in the campaign for and against a ballot measure to curtail the ability of cities to enact what's known as an earnings tax. Last week, I was trying to get an interview with Rex Sinquefield, the wealthy Missouri businessman and libertarian enthusiast who's been bankrolling the measure.

After a bit of phone tag, Sinquefield's assistant called the office back with some sobering news: Mr. Sinquefield is not doing any interviews with the media.

They say, "Once bitten, twice shy." I never let that get the best of me before and I won't let it get me down now, either. After all, if you never swing, you'll never get a hit. I'll keep swinging.