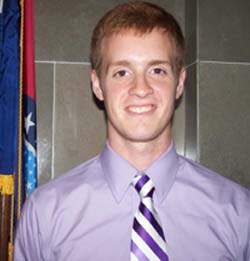 Ben Wagner is a Broadcast Journalism student at the University of Missouri School of Journalism. He is from Apple Valley, MN.

While in mid-Missouri, Ben reported for KOMU-TV, the NBC affiliate in Columbia/Jefferson City, Mo. since December, 2008. He plans to study abroad in Brussels during the spring of 2011.

He is interested in business, politics and (being from Minnesota) hockey. Upon graduating in May 2012, Ben plans to become a business reporter anywhere in the country.

Stories by Ben Wagner in 2010 include:
Ben Wagner's Blog in 2010
Power outage at the Capitol

Today was by far one of the most interesting days spent at the Missouri Capitol. I had this big plan to make some serious headway on a story Breana and I have been working on nearly all semester. But, as this business has shown me time-and-time again - be ready to adapt. I stepped inside the Capitol entrance to near complete darkness, only lit up by distant flashlights used by legislators and electricians alike. The power was out at the Capitol.

With no computers, phones or lights in the office, all we could do was just head to lunch and hope workers could have things fixed by the time we got back. While they were fixed relatively quickly after we returned, I learned a valuable lesson today - no matter what, the news still presses on. Just because we were without power did not mean we were done for the day. We just had to find ways around it. We produced stories in the dark with a Merantz and we reported on the Freshman Legislative Orientation... in the dark (could be a sign of how the legislative session will play out this spring).

Food science, nutrition, computer science along with three foreign languages are all programs that meet the state's criteria as "low-producing".

This issue feels like a huge reality check. Teachers in secondary public schools have been laid off at an alarming rate since 2000 and now it appears that trend is catching up with those in post-secondary education. Although it isn't a done-deal just yet, schools (especially the UM system) are looking for any way to save money. In an economy streched as thin as it is, cuts like these are understandable.

But 75 programs? To me, that seems excessive.

If some or all of these programs are cut, many professors will likely loose their jobs. My biggest question is: are the classes related to these programs going to be cut as well?

I overheard an interesting tip in the newsroom today about the dangers of traveling abroad. The U.S. State Department issued a travel alert to all Americans planning on traveling abroad between today and January 31, 2011. The report says current intelligence suggests al-Qa'ida plans to continue terrorist attacks in European areas.

The report seems very vague in saying Americans should be cautious in traveling to foreign countries without giving much reason why. Yes, increased terrorist activity is certainly reason for concern. But in today's society when an increase from yellow to orange isn't even news anymore, who can tell what's really serious and what could be ignored?

This caught my eye mainly because I'm planning on studying abroad in Belgium during Spring 2011. The report hasn't changed my view on studying abroad at all but I'm curious to see if this deters anyone from taking the opportunity to travel abroad. In my opinion, I certainly hope not. Yes, there are risks in living in a foreign country for an entire semester. But this is really the only chance people have to see the world for a long period of time without too much responsibility. It's something I hope everyone has a chance to do during their college careers.

Here's a link to the full report on the State Department's website - http://travel.state.gov/travel/cis_pa_tw/pa/pa_5171.html

The verdict - wait and see.

I spoke with the heads of the Retailers and the Bankers Association about how this new law could affect Missouri business and the economy. Each of them were wary of leaning one way or another about saying they were completely in favor or completely against the law. Specifically, Max Cook with the Bankers Association was really unsure about the financial aspects of the law. While the provisions promote lending to small businesses through small banking channels, he said healthy banks might not have a reason to participate in the program.

From a retail standpoint, most small businesses really have no reason not to be happy. The law allows self-employed business owners to deduct 100% of their health care costs from their self-employment taxes. This is a dramatic decrease from the roughly 15% tax business owners had to pay before the bill was passed.

Monday was my second day at Missouri Digital News, but the first day I produced a story. The story focused on the Smart Sentencing decision by the Missouri Sentencing Advisory Commission. This gives Missouri judges the opportunity to see the total price tag associated with each sentence option. According to the Sentencing Commission, a year in prison costs Missouri taxpayers more than $16,000 whereas a year on probation costs the state about $1300.

I thought this was a really interesting story mainly because it there are very stark divisions between those who agree with this option, and those who do not. I was able to speak with a defense attorney based in St. Louis who thought this decision makes a lot of sense in a society with overcrowded prision populations and an economic shortfall. But at the same time, a prosecuting attorney I spoke with was worried this option might influence a judge's opinion, putting dollars and cents ahead of justice.

The Sentencing Commission made this recommendation just under a month ago. Will this option have a positive or negative effect in Missouri? We'll have to wait and see...