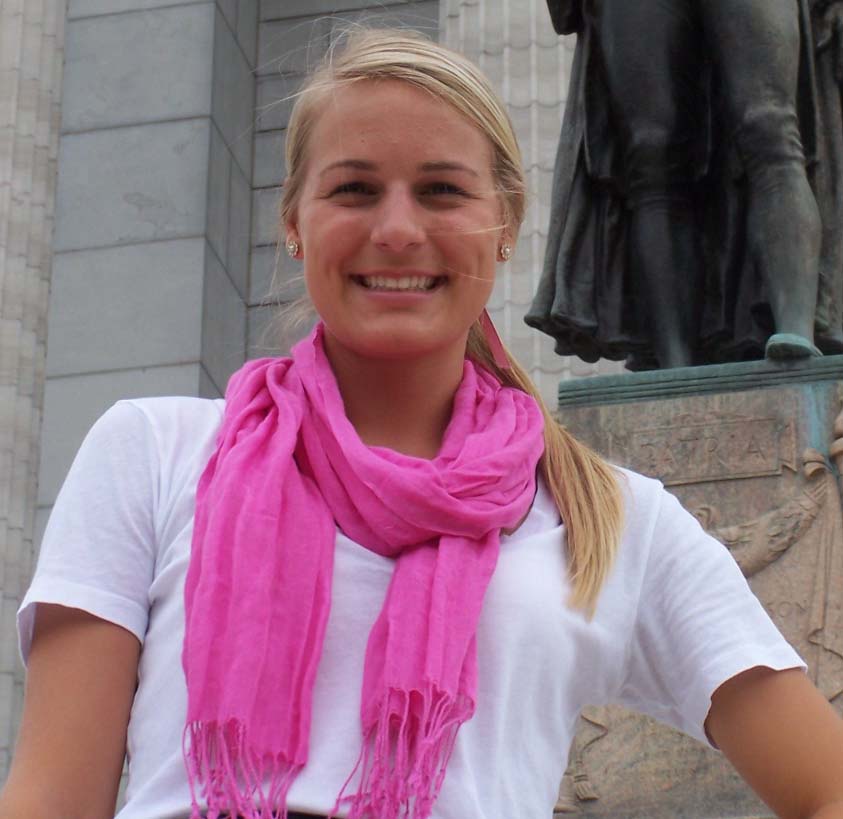 Molly Boland is a junior broadcast journalism major and business and political science minor from St. Louis. She began reporting for Missouri Digital News in August 2010.

Boland is interested in broadcast production as well as the option of going to law school after graduation.

It's definitely nice to be back in the newsroom. Tuesday, Michael and I spoke with many new Missouri Representatives attending their freshman orientation at the capitol. Among the new members of th legislature we spoke with were a retired truck driver of 29 years and a former FBI agent. Each felt strongly about one or more issues they would like to see addressed when session begins. We spoke with three new members of the house total. Two represent areas in Kansas City and the third represents South St. Louis County. Michael and I turned three quick wraps and off to the KMOX lineup they went.

Today is Thursday and Phil, Alysha, and I stood in on Steven Tilley's announcement of House committee chair assignments. It was a very informative and interesting press conference. I'm currently waiting on a phone call back from Mike Talboy to get his reaction to Tilley's words and selection of not one but three democratic party chairs for the House.

So few days left here at the capitol and I feel as if they'll be filled with news!

Week 12-13
Posted 11/24/2010:  Last week Theo and I worked on some MoDOT news. I sat in on a press conference as MoDOT named their new director and listened to him speak about upcoming plans to use transportation funds in the most effective and efficient way. After a couple intense editing sessions, I voiced three wraps and off to KMOX they went!

I was not in the news room this past week, and now it's about time to celebrate Thanksgiving with the family but I'll be back at the capitol in no time to catch the latest spot news!

Election night was a great success. I learned a lot, reported live on KMOX in St. Louis, and covered a win by Tom Schweich in the race for state auditor.

Thursday in the newsroom, Theo and I covered all things MoDOT and their new director Kevin Keith.

It's more exiting to be in the newsroom when there's more commotion going on in the state. Things are really picking up and I'm glad. I can learn more, accomplish more, and become a better journalist.

Week 10
Posted 10/28/2010:  Spoke with Gov. Nixon and turned a broadband story this week. Today in the newsroom we were all in preparation mode for election night. I am excited to go to St. Louis with Alysha Love for Tom Schweich's watch party.
Week 9
Posted 10/21/2010:  Woohoo Feature is finished! I couldn't be happier. The interview with Schweich finally took place Tuesday morning and I turned the story by 4pm.

Spot news here I come! A quick story regarding Claire McCaskill's brother and possible drug charges is next on the agenda but by the time I get back to the news room on Tuesday this story will be old news. It can be found on AP though. I was hoping to turn a wrap for radio but I did not get a call back in time in the newsroom today.

Time to hit the book some more for the Common Law test again and then ESPN GameDay for HC 2010.

The great news is, I finally got a hold of Tom Schweich. That bad news is, he did not want to speak with me or answer my questions at that time. Funny enough, my partner Alysha Love had this exact same run in with him. Branson may be our last chance to get my questions answered. Phone calls and emails along with more phone calls and emails have all resulted in ZERO Schweich audio. I know what you're thinking: "How on earth does one write a profile about a candidate with out speaking to them?" I'll get back to you with the answer to that question very soon. I know journalists are supposed to be investigators and tough, but I have always and will always be such while I keep the best of intentions and stay true to the ethics. I'm not one to give up and write about how uncooperative an interview subject has been so over the past few weeks I have tried several other Schweich ties. His endorsers are happy to tell me how qualified Schweich is while his wife did not wish to speak with me. However I did learn today that Schweich is a coin collector.My professional goal throughout this process has always been to inform the public about Schweich's character and his integrity. I hoped to shed light on him as a person and not only as a candidate. Weeks later... I am still searching. This feature is sort of like a Tom Schweich puzzle. I am missing one piece and one piece only: Tom himself.

Until next time, I'm Molly Boland.

My profile feature is finally well underway. I am collecting more audio and interviews by the day. Today I spoke with Jack Danforth. Danforth has known Schweich for years and worked with him on a variety of projects as well as at Bryan Cave law firm. He has much to say regarding Schweich's character, intelligence, family life, experience as an author, his work ethic and so much more.

The state auditor debate is next week and I hope to be there. The question is not if I will get natural sound but when and where these interviews will take place. The Ozarks, Branson, or Joplin? It's travel time.

Today at lunch Phil Brooks said to me, "Molly I thought you were a dragon slayer, but you have yet to slay any dragons." If by dragon slayer he means "aggressive worker" or "go getter" then surely Mr. brooks will stand corrected in no time.

As last week was slower in the newsroom, I predict the tempo to pick up this week as the importance of our campaign features increases more and more. November will be here before we know it so I have much more to write about Schweich before turkey month begins.

I'm glad to be feeling better and heading back at the Capitol tomorrow morning.

Week 5
Posted 09/23/2010:  So, after turning what began as a quick radio wrap for me last week... health insurance turned out to be breaking news. Nearly fifteen hundred children in Missouri could not have the option to renew their health insurance policies once they expire. This is because many companies have chosen to no longer offer child-only policies.

Sunday morning my mother called me and told me her coworker called her and had exciting news. Marybeth told my mom she heard me on the radio talking about health insurance on KMOX. Needless to say I was thrilled. I was not expecting that phone call but now more than ever I would like to turn more stories more often.

What next? Who is going to insure these children now? Will child-only policies stay off the market?

Last week was all about  the Capitol building. Renovations, crumbling steps, and possible legislation were all topics of discussion. I spoke with Rep. Sue Allen and Rep. Tom Flanigan. Rep. Flanigan mentioned mold and fake walls as well as paper covered wires during our interview. Political science has never really been my strongest subject but the more I hang around the Capitol and in the newsroom, things are changing.

Deadlines for campaign features are drawing closer and closer so I am on a mission to learn even more about  potential state auditor Tom Schweich and his efforts and intentions. We already know Schweich has a variety of experience. This week I plan to take a closer look at who is funding his campaign and what his daily life consists of in his neighborhood.

Some say "there are not enough hours in the day." Journalists tend to prove otherwise.

So, never has a shift at the Capitol left me with so much direction! My features for the semester will be:

2. ACT and SAT scores in Missouri. What geographical areas have the most consistent high scores and low scores? What are educators doing to help improves scores for students? As the number of high school graduates who attend college increases each year, is the importance of these examinations as well?

3. Alysha Love and I will be profiling state auditor Tom Schweich as the November election approaches.